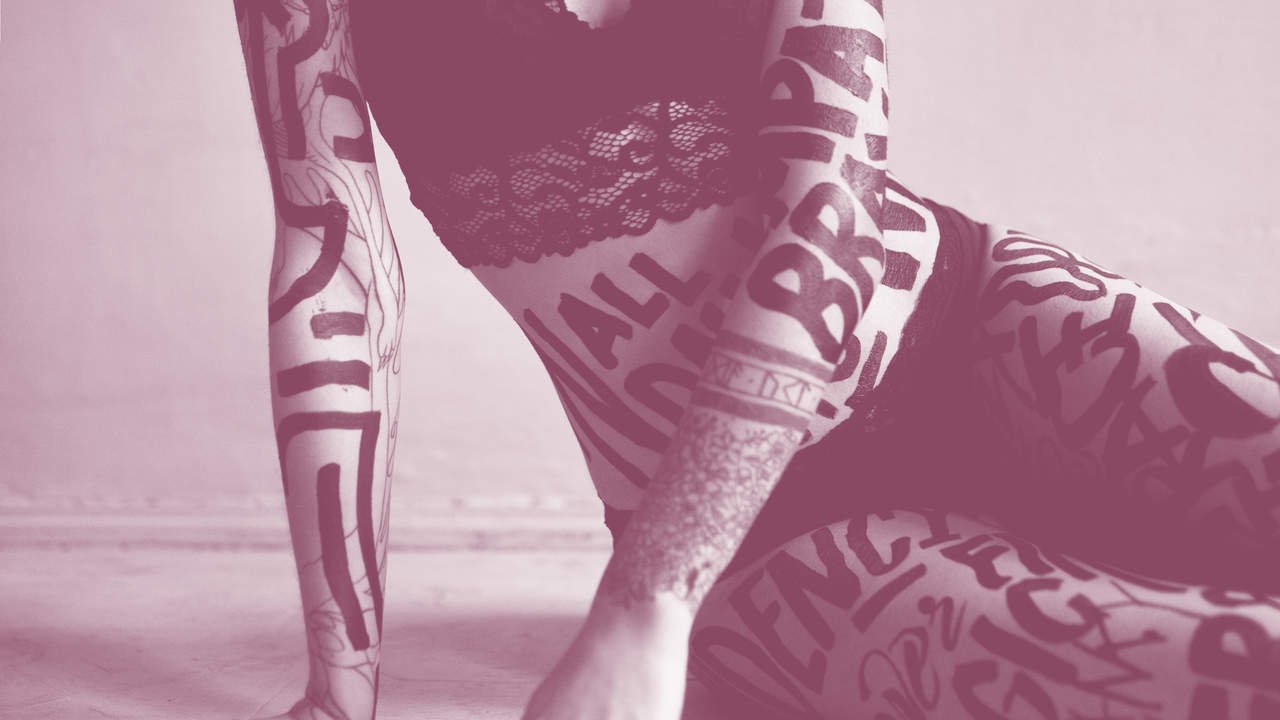 Have you ever had someone say something offensive to you online? If you have, you know the kind of pain it can cause. You tell yourself you shouldn’t take it personally, but it’s hard not to internalize it, at least a little. Influencers know this struggle better than anyone, and they’ve launched a clever new way to stand up to the trolls who try to knock them down.

These women are taking the hateful comments left on their photos and owning them, putting them front and center for the world to see. They’re writing them on their bodies, pasting them over their images, and ultimately refusing to be defined by labels others try to put on them.

“Fat,” “gross,” “yuck,” and “pig” are some of the comments Amber Dawn got on a recent photo she posted rocking a bikini. Instead of shying away from the bullies who wrote them, she decided to post another bikini photo, but this time she would write those comments on the photo itself. Her message: I’m not afraid of your words.

Just a few of the delightful comments from trolls on my last bikini post that have since been reported and their accounts deactivated by Instagram. This a a hate free zone. A safe space for women to uplift and support one another. I will never tolerate hateful comments, attacks or abuse on myself or my girls that I post on this site. Be careful when you comnent because we are a powerful movement and Instagram does listen to us and does take action. And that includes any fitspo, dietician, health coaches that get on here and tell me plus size women are unhealthy. You guys can pipe down and take your ridiculous advice elsewhere Love @amberdawnmodel

The best part is, she reported their original comments and got them kicked off Instagram. “Just a few of the delightful comments from trolls on my last bikini post that have since been reported and their accounts deactivated by Instagram,” she wrote in her caption.

Dawn isn’t the only one to stand up to trolls by using their own words against them. Sarah Nicole wrote comments like “disgusting,” “old news,” “pathetic,” and “only wants men’s attention” on top of a photo of her in leggings and a sports bra. But if you scroll to the right, you’ll see she posted another photo. It says “genuine,” “unashamed,” “strong,” and other descriptive word that reveal who she really is.

“Let this be a reminder for us all: we are not the words we are labeled by,” she wrote in her caption. “We are the truths we walk in, know, and carry in our hearts. Nobody can take that from you, nobody can rewrite them no matter how much they try.”

Words can really, really hurt. ⁣ No matter how time goes on they tend to hurt me too. ⁣ However, in time I’ve grown to own my truths and walk boldly in them. ⁣ Knowing people will ALWAYS have something to say and not EVERYONE will like you (?). ⁣ People pleasers hear me well on this – yeah that’s not freaking easy. ⁣ ⁣ Shane will often see in my body language when I’ve gotten another nasty message. I’ll say nothing at all and he can just look at me and know. That’s how much it deflates me. It’s visible in my physical appearance. ⁣ ⁣ Here’s where I’m winning: they don’t STOP me. The deflate time has become shorter and shorter. I have become less judgmental towards others now knowing how much it hurts when people judge me and how wrong they usually are. ⁣ ⁣ Let this be a reminder for us all: we are not the words we are labeled by. We are the truths we walk in, know and carry in our hearts. Nobody can take that from you, nobody can rewrite them no matter how much they try. And the hardest one for me? You don’t need to respond or defend yourself. Negative energy is seeking one thing – to draw out yours. ⁣ ⁣ Kill it with kindness. If not to them, then to yourself. ⁣ ⁣ Every single one of these words has been said to me. More that wouldn’t fit. More that I can’t even speak. ⁣ ⁣ I wash those away with truths. ⁣ ⁣ This was a very therapeutic exercise for me that I highly recommend. That negative energy washed over with a positive one. ⁣ Because we have sh*t to do and no time to waste being deflated ??

Influencer Carly Rowena created her own take on the trend. Instead of writing some of the hurtful comments she’s received over a photo of herself, she wrote them on her actual body with bold black marker. She posted a video of herself in her bra and underwear writing the words on her skin and then washing them off.

“The comments above are just a few of the comments, DMS, and emails that have never left my mind, luckily I have the most supportive online community and the negative only accounts for 0.01% but funnily enough those are the words that stick,” Rowena wrote. “Let’s make each other strong by showing the bullies [sic] it’s just water off our backs!”

B U L L Y I N G ✖️ Whats the worst thing that was ever said to you online? You’re killing your Baby by working out. You look like a man. Your husband must be gay to want to marry you. Your skin is awful, why don’t you cover it up? Muscles on women is disgusting. You’d be so much prettier if you lost weight. You’re too lean do you even eat? The comments above are just a few of the comments, DMS and emails that have never left my mind, luckily i have the most supportive online community and the negative only accounts for 0.01% but funnily enough those are the words that stick. Although I hope that none of you have experienced this i’m pretty sure you have which is why i’d really love you to tell me, @antibullyingpro & @glamouruk what you’ve endured in the comments below or in your own little social post! Let’s make each other strong but showing the bully’s it’s just water off our backs! Ps: You can donate to the #BlendOutBullying campaign by texting GLAM18 and the amount you wish to give to 70700 (eg GLAM18 £3). Just £30 trains one anti-bullying ambassador who can then go on and help countless others . . #28weekspregnant #antibullying #bodypositivity #BlendOutBullying #inspirepregnancy

At the end of Rowena’s video, after she erased all of the negative comments from her body, she wrote something else on her skin: I love me. That’s what all of these women are trying to say. They love themselves, despite all of the negativity that’s thrown at them, and you should too. No, it’s not always easy, but if we band together and put the haters in their place, positivity will always win.

To get our top stories delivered to your inbox, sign up for the Healthy Living newsletter